Seaweed is the common name for marine algae and are a group of species from the Protista kingdom that fall into three distinct groups:

Although algae are not plants, they do share some basic characteristics with them. Like plants, marine algae use chlorophyll for photosynthesis. Seaweeds also have plant-like cell walls. However, unlike plants, seaweeds have no root or internal vascular systems, nor do they produce seeds or flowers, both of which are required to be classified as plants.[1]

Seaweeds are generally anchored to the sea bottom or other solid structures by rootlike “holdfasts,” which perform the sole function of attachment . A number of seaweed species are edible, and many are also of commercial importance to humans. Some are used as fertilizers or as sources of polysaccarides.

Seaweeds often form dense growths on rocky shores or accumulations in shallow water. Many show a well-established zonation along the margins of the seas, where the depth of the water is 50 metres or less. The types of seaweed growing near the high-water mark, where plants are often exposed to air, differ from those growing at lower levels, where there is little or no exposure.

Brown algae commonly found as seaweeds include kelps and Fucus. They are widely distributed in colder zones and are among the largest algae.

Red alga seaweeds include dulse (Palmaria palmata), Gelidium, Chondrus, and laver (Porphyra). Various species of Chondrus, including Irish moss (C. crispus), carpet the lower half of the zone exposed at low tide along rocky coasts of the Atlantic. 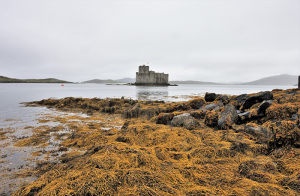